Growing up in the neighborhood, now known as the Eastside Pioneers Neighborhood Association, I remember well the Rochester State Hospital and the Tyce House that was located just down the road, on East Center Street, where East Park is now. The two entities are intrinsically intertwined.  The Tyce House was where the medical director for the Rochester State Hospital lived.  Built in 1937-38, during the Depression, the 2 story brick and stone house, was probably the only residence built in Olmsted County by the Works Progress Administration (WPA).   It took on the name of the last medical director that lived there, Dr. Francis A. Tyce who headed the hospital for 22 years until it closed in 1980. See attached information.

The Rochester State Hospital opened on January 1, 1879, as Minnesota’s second hospital for the mentally ill. It served as part of Minnesota’s state hospital system until 1982, when changing trends in treatment for the mentally ill and lack of funding led to its closure in June 1982. It was a noted mental health care facility. By the 1960s, the hospital was known for its surgical unit. It served as a center for many other state institutions and by 1971 was the only remaining surgical unit in the state hospital system. In the same year, it became the surgical center for the Department of Public Welfare.  Unlike other state hospitals, which received patients through court orders, Rochester admitted a majority of its patients voluntarily.

Berdine Erickson was a familiar name to many in our neighborhood and community. He spent the majority of his adult life as a psychiatric aide/rehab counselor at the Rochester State Hospital and led an active community-service life.

Berdine was an active member of the Eastside Pioneers Neighborhood Association up until his death in 2006. After the Rochester State Hospital closed Berdine wanted to do something to commemorate both the lives of the patients seeking mental health treatment and those who sought to provide care for them.  There were also a number of patients that died there and were buried in the State Hospital Cemetery located in present-day Quarry Hill Park.  Berdine and Roland Anderson, of Anderson Monuments, tried to organize an effort to mark the graves in Quarry Hill Park.  The two men worked together on placing a monument in the cemetery, but couldn’t find funding for headstones.

A working relationship was established between Anderson memorial and Berdine Erickson. Working collaboratively with other groups Berdine and Jeff Anderson, Roland’s son, were able to place grave stones for the deceased and erect monuments commemorating both the patients that sought treatment here and the employees that cared for them.  One of the existing memorials is located in East Park on East Center Street.  In Berdine’s words, “I felt we needed to leave a footprint in recognition of the state hospital workers, patients and for the Rochester community.” See attached information. 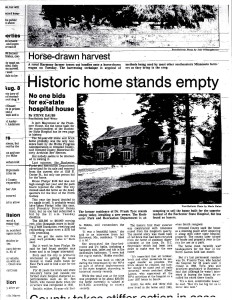